Peoples Right and The Police

2. Article 21 of the Constitution of India, which is a fundamental right available even to a non-citizen, ensures the protection of life and personal liberty of all persons. A speedy investigation by the investigating agency and speedy trial are the fundamental rights of a person as enshrined in Article 21. Right of an accused person to be defended by an Advocate at the expense of the State, who do not have the means to engage an Advocate, also comes within the purview of Article 21 of the Constitution.

3. Article 22 of the Constitution of India also confers a fundamental right on all persons to be informed about the grounds of his arrest, right to consult an Advocate and right to be defended by a legal practitioner of his choice. Such a person cannot be detained in custody of police for more than 24 hours. The person arrested is required to be produced before the nearest Magistrate, within a period of 24 hours of such arrest, excluding the time necessary for the journey from the place of arrest to the Court of the Magistrate.

4. Chapter-V of the Code of Criminal Procedure deals with the arrest of a person by the police and also rights of the accused person. Section 41A has been inserted in Chapter-V to avoid unnecessary arrest, with effect from 01.11.2010. A police officer cannot, unless the grounds mentioned in Section 41 exist, arrest a person, without issuing a notice directing the person against whom a reasonable complaint has been made or credible information has been received, or a reasonable suspicion exists, that he has committed a cognizable offence, to appear before him or at such other place as may be specified in the notice. It is, therefore, always not necessary to arrest a person unless the conditions specified in Section 41 are fulfilled. A person to whom a notice under Section 41A has been issued, can, however, be arrested, if he does not comply with the notice.

5. The Code of Criminal Procedure also provides that:-
(i)    the arrested person has a right to meet an Advocate of his choice during interrogation;
(ii)    the police officer arresting an accused person must bear an accurate, visible and clear identification of his name so as to facilitate easy identification;
(iii)    the person arrested shall not be subjected to more restraint than it is necessary to prevent his escape, meaning thereby a person cannot be hand-cuffed unless absolutely necessary;
(iv)    member of the armed forces of the Union cannot be arrested by the police for anything done or purported to be done by him in the discharge of his official duty. Such arrest, however, can be made after obtaining the consent of the Central Govt and subject to the Notification that may be issued by the State Govt;
(v)    the person arrested has to be informed of the grounds of arrest and about his right to apply for bail;
(vi)    the police officer arresting an accused person has to give information about such arrest to any of his/her friend, relatives or such other person, whose name is provided by the accused person;
(vii)    the police officer must inform the arrested person that he can give the name of a person to whom information about the arrest has to be supplied;
(viii)    the arrested person has to be medically examined;
(ix)    the arrested person cannot be detained in police custody for more than 24 hours. He has to be produced before the nearest Magistrate;
(x)    a woman cannot be arrested after sunset and before sunrise;
(xi)    a woman, however, can be arrested after sunset and before sunrise, after obtaining the prior permission of the Judicial Magistrate of First Class within whose jurisdiction the offence is committed or the arrest is to be made;
(xii)    a woman can be arrested by a woman police officer only;
(xiii)    the police officer cannot search for any residence, to execute a warrant of arrest or arrest a person, if it is in the actual occupation of a female, against whom such arrest warrant is not issued, who according to the custom does not appear in public, unless a notice is given to her to withdraw from the residence. In case of non-compliance, the police officer, however, may break open the apartment and enter it;
(xiv)    a first information report can be made orally to a police officer in any police station and such oral information, if constitutes a cognizable offence, has to be reduced in writing by the police officer and thereafter upon obtaining the signature has to provide a copy to the informant free of cost;
(xv)    such verbal information can be sent over the telephone also;
(xvi)    a written FIR, disclosing a cognizable offence has to be accepted by the officer-in-charge of a police station or in charge of a police outpost and has to be registered. A free copy of the same shall also be provided to the first informant after acknowledging receipt of the same;
(xvii)    FIR can also be sent to a police station by Post or by e-mail;
(xviii)    in case the officer-in-charge of a police station or any police officer refuses to accept such first information report, the first informant has a right to send such information by Post to the Superintendent of Police of the District.
(xix)    no police station can refuse to accept a first information report on the ground that the place of occurrence does not fall within the jurisdiction of the said police station. Such FIR upon receipt and registration has to be sent to the PS in whose jurisdiction offence was committed.
(xx)    an arrested person has the right to be released on bail on expiry of 60 days of his arrest, if the investigation does not relate to an offence punishable with death, imprisonment for life or imprisonment for a term of not less than 10 years, provided no charge-sheet is filed;
(xxi)    an arrested person is entitled to bail on expiry of 90 days from the date of his arrest, where the investigation relates to an offence punishable with death, imprisonment to life, or imprisonment for a term of 10 years, provided no charge-sheet is filed;

6. The Assam Police Act, 2007 confers certain rights on every person, namely -
(i)    a person has the right to lodge a complaint before the State Police Accountability Commission, Assam on the allegation of serious misconduct, namely –
(a)    death in police custody;
(b)    grievous hurt, as defined in Section 320 of the Indian Penal Code, 1860;
(c)    molestation, rape or attempt to committing rape; or
(d)    arrest or detention without due process of law;
(e)    forceful deprivation of a person of his rightful ownership or possession of the property;
(f)     blackmail or extortion;
(g)    non-registration of First Information Report.
(ii)    a person can also approach the State Police Accountability Commission, Assam, if he has any grievance    of the commission of ‘misconduct’, as defined in Section 78 of the said Act, by any police personnel;
(iii)    the rights of a complainant before the State Police Accountability Commission are enumerated in Section 88 of the said Act;
(iv)  The person cannot be subjected to civil and criminal proceeding for the statement made by him in the course of the enquiry conducted by the Commission. Such a statement also cannot be used against the person making it in any such proceeding. The person, however, can be prosecuted for giving false evidence. 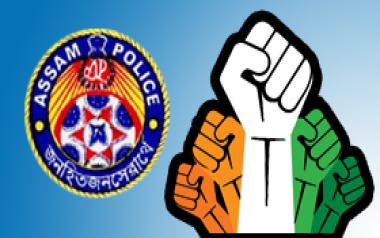